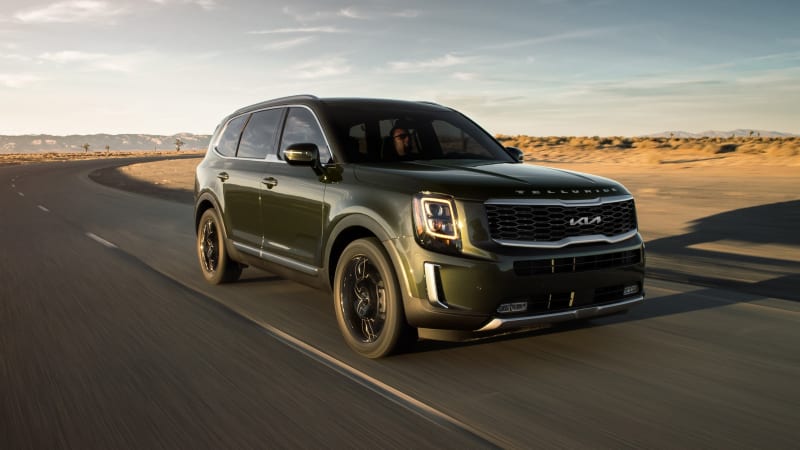 Kia’s three-row Telluride is on a roll, but the South Korean firm can’t afford to rest on its laurels. It made small but meaningful updates to the crossover for the 2022 model year to help it fend off a growing list of competitors.

Outside, the biggest update is a redesigned grille that proudly wears Kia’s updated logo. Inside, Kia upholds its reputation for building value-packed cars by making more equipment standard on the lower trim levels. LX and S variants (the cheapest members of the range) benefit from the 10.25-inch touchscreen that was previously standard only on EX models and up. Both trims also gain an automatic climate control system for the front and rear passengers as well as Kia’s Highway Driving Assist technology. S models now offer a wireless device charger, too.

Navigation-Based Smart Cruise Control-Curve (NSCC-C) becomes standard across the range for 2022. It’s a system that relies on navigation data to recognize curves, different speed limits (even temporary ones), and other factors and adjust the cruise control’s set speed accordingly. For example, it knows when the Telluride is about to enter a school zone or when there is a bend in the road that it needs to slow down for.

Kia made no mechanical changes, so power comes from a 3.8-liter V6 rated at a stout 291 horsepower and 262 pound-feet of torque. Front-wheel-drive and an eight-speed automatic transmission come standard, and all-wheel-drive is optional. Gas mileage checks in at 20 mpg in the city, 26 mpg on the highway, and 23 mpg combined when only the front wheels receive power. All-wheel-drive lowers those figures to 19, 24, and 21, respectively.

When it lands, the updated Telluride will compete in a hotly-contested segment against the Nissan Pathfinder, the Honda Pilot, and the Subaru Ascent, among other models.