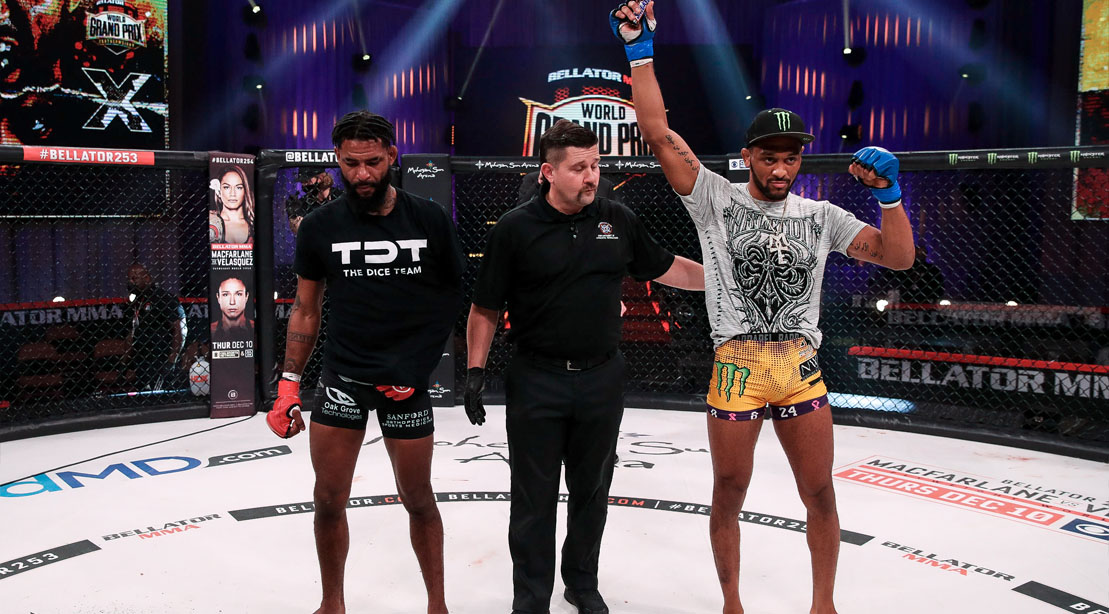 After each of his 17 wins to begin his career, AJ McKee has made sure to make it known that his sights were set on Patricio “Pitbull” Freire, the current featherweight and lightweight Bellator champ and a man who many consider to be the greatest MMA fighter in that promotion’s history.

After publicly calling him out countless of times, “the Mercenary” (17-0-0) gets his opportunity to claim what he feels is his on July 31 at Bellator 263 on Showtime in the Featherweight World Grand Prix Finals for the world title and a million-dollar prize. Adding to storybook element is the fight will be taking place at the Forum in Los Angeles. McKee, who is a Compton native, will have the support of his hometown as he looks to dethrone Pitbull (32-4-0) and take the next leap in his career.

We spoke with McKee on just how he’s been prepping for the fight he’s been calling for since his Bellator career begin and his plans on utilizing the prize money.

You’ve been calling for this fight since your first victory. With how long you’ve been pushing for this opportunity, how do you temper your emotions now that the fight is approaching?

The big key is to just remain focused on keeping the course. My dad is really good at keeping me levelheaded. He knows I’m one to just go and get it, and he’s always telling me to fight smart, don’t be eager to go and get it. That’s going to be a big part in this fight with Pitbull. When everyone fights him, they take the fight to him. Being able to notice that, keeping in mind that I’m the longer, younger, stronger, and faster man, I don’t need to be eager to go get it. Once that door closes, I have 25 minutes to do what I do best and make him bring the fight to me. At the end of the day, he’s the champ, but he’s fighting me in my hometown, my backyard. I’m going to have all the fans in there cheering for me, which is going to be awesome.

Have you allowed yourself some opportunity to get your mind away from the fight a little bit or have you remained locked in?

I kind of stay busy, and I get that from my dad. Staying busy keeps our minds going to where we can focus on the task at hand. I’m not a person who can stay focused on one thing. Obviously, the main goal is beating Patricio Pitbull. Having been calling his name for 17 fights, that’s been who we’ve trained for since the beginning of time because he’s been the man. I feel he takes it a little personal at times, but it’s nothing personal. He’s been a great champ and has held that belt since I’ve first stepped foot in the organization. It’s going to be a fun one and I’m looking forward to it.

Considering the odds you overcame from in growing up in Compton, CA, how much sweeter does having this match in your hometown make this fight for you?

I think that only adds 10 times more motivation for me to make sure to go out there and fight smart. The fact that I know the entire arena is going to be behind me is amazing. It’s not like we’re in Brazil fighting in front of his hometown. Yeah, he’s the champ, but he’s got to bring the fight to me. At the end of the day, if people are booing, they’re being him because I know they aren’t booing me. It’s going to be fun. Keeping that in mind, it gives me more of an incentive to do things right.

I’ve watched him throughout the tournament, and everyone has seemed to have a great game plan but they all kind of resort back to what they know and that’s chasing him. Staying composed and calm is going to be a big key in this fight once we get in there. I can say what I’m going to do until we get in there and that door closes. Once we touch gloves, an entirely different animal comes out. Once he realizes what he’s dealing with when that door closes, that’s when the fun starts.

There are pros and cons to the tournament style. What’s your thoughts on it?

I would say I kind of don’t like it. If this was back in the day and it was the old PRIDE rules and we get the whole tournament done in one or two nights, I’d be all about it. I feel like those were the best tournaments that MMA had put on. Obviously, with COVID happening during the tournament, it’s been a little prolonged and having two fights in the past two years isn’t ideal. At the end of the day, after going through knee surgery, it gave me time to recover and I have to count my blessings where I can. I’m still in the tournament and I take that as a blessing. Finishing everyone in the tournament is a big stamp on my career. I’m going through the entire tournament with finishes. At the end of the day, it’s a fat payday and I’m looking forward to it.

After the surgery, how long would you say it took for you to get to a level to where you were no longer thinking about the knee?

[Darrion] Caldwell and I were supposed to fight in June. I signed the contract and was ready to fight and about 80 percent. It would’ve been perfect timing, but that fight got postponed. By the time June came, I was ready and after that, it was good. It was about six months after surgery before I felt I was good.

What does a typical day of camp consist of for you?

From a nutritional standpoint, that depends on my weight. One night, I had asparagus, a wagyu bone-in ribeye, and spinach. This morning, I woke up, had an egg white omelet with a little bit of the leftover steak. Training wise, running is key to get my weight down. My dad has these crazy ass workouts that I hate with a passion, but I love at the same time. We call him the Wizard because he comes up with some crazy stuff. For the most part, it’s two days on with three practices, including the run at day and night. That’s about it. A good run, then a hard practice in the morning with the team. The nighttime practice is more mitt work, strength and conditioning, and we go from there.

Have you allowed yourself to consider what you would do with that million-dollar prize?

Real estate and some investments is a great way to go. I live in Los Angeles, and a mil is a nice down payment on a nice house in the neighborhoods I’m trying to live in, if even a down payment at that. It’s a great start and I can pay my dad’s house off and go put a nice down payment on something for myself and look at what’s to come in the future. Being undefeated and seeing a million dollars, I feel I shouldn’t see anything under that. I want to keep reaching new plateaus and change the sport of mixed martial arts altogether. There’s nothing really left for me at the 145-pound division. I’ll have had 18 fights at that point in that division, so I’ll go up to 155 pounds and dethrone Patricio there as well and see how things go from there.