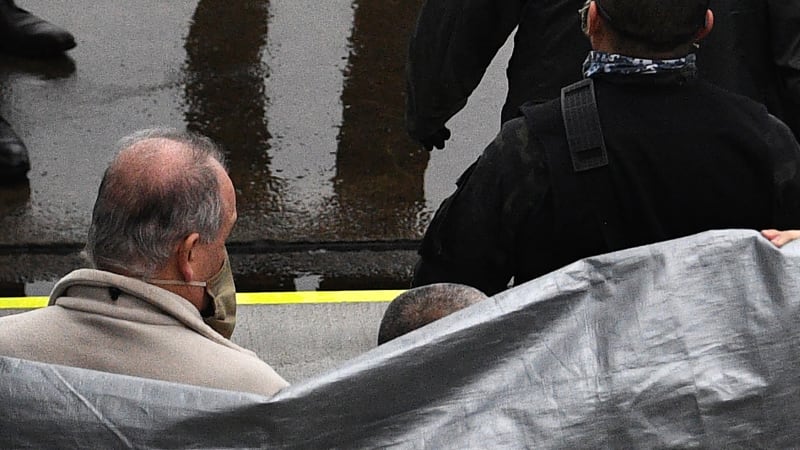 A man, left, believed to be Michael Taylor, is escorted by Japanese officers after arriving at Narita airport in March 2021 following his extradition from the US. (Getty Images)

TOKYO — A U.S. Army Special Forces veteran and his son pleaded guilty in Tokyo on Monday to charges that they illegally helped former Nissan Motor Chairman Carlos Ghosn flee Japan hidden in a box aboard a private jet in December 2019.

Chief judge Hideo Nirei, one of three judges presiding over their first court appearance, asked Michael Taylor and his son Peter whether there was any mistake in the charges submitted by the Tokyo Prosecutors’ office.

“No your honor,” the older Taylor replied. “No,” said his son.

Extradited to Japan from the United States in March, they are being held at the same jail in Tokyo where Ghosn was detained. They could face up to three years in prison.

Wearing black jackets and pants, white shirts and plastic slippers, they were led into court with ropes threaded through handcuffs and tied around their waists.

Prosecutors accused them of helping Ghosn evade punishment and escape to Lebanon from western Japan’s Kansai airport, receiving $1.3 million for their services, some of which was paid to an advertising company owned by the younger Taylor. The Americans asked Ghosn for another $500,000 for legal fees after Japan sought their arrest, prosecutors said.

They also described the younger Taylor as a frequent visitor to Lebanon, and said planning for the escape began around six months before Ghosn fled.

Their statement also said that Ghosn’s wife, Carole Ghosn, sought help from Michael Taylor, with Carlos Ghosn later contacting him from Tokyo with a phone he had hidden from Japanese authorities.

A third man, George-Antoine Zayek, recruited by the Taylors, traveled to Japan later in 2019 to find a way through airport security, settling on the private jet terminal at Kansai airport as the best route out, the prosecutors said. Zayek remains at large.

Luggage that does not fit through the security scanning machine there is inspected by hand. That check, however, can be waived by the pilot.

The Taylors’ lawyers in the United States waged a months-long battle to prevent their extradition to Japan, arguing they could not be prosecuted for helping someone “bail jump” and that they could face relentless interrogations and torture.

Suspects in Japan are interrogated without their lawyers present and are often denied bail before trial.

At the time of Ghosn’s escape, he was awaiting trial on charges that he understated his compensation in Nissan’s financial statements by 9.3 billion yen ($85 million) over a decade and enriched himself at his employer’s expense through payments to car dealerships.

Ghosn — who denies any wrongdoing — remains a fugitive in his childhood home, Lebanon, which has no extradition treaty with Japan.

Greg Kelly, a former Nissan executive charged with helping Ghosn hide his earnings, is also standing trial in Tokyo. He denies the charges.

The Taylors will make their next appearance in court, the same room where Kelly’s trial is being held, on June 29, when their lawyers will deliver a statement and the Americans will be cross-examined.

U.S. to Buy $1 Billion Worth of Rapid COVID Tests

‘Extreme Heat’ Days Have Tripled Since 1980s, and More Are Coming