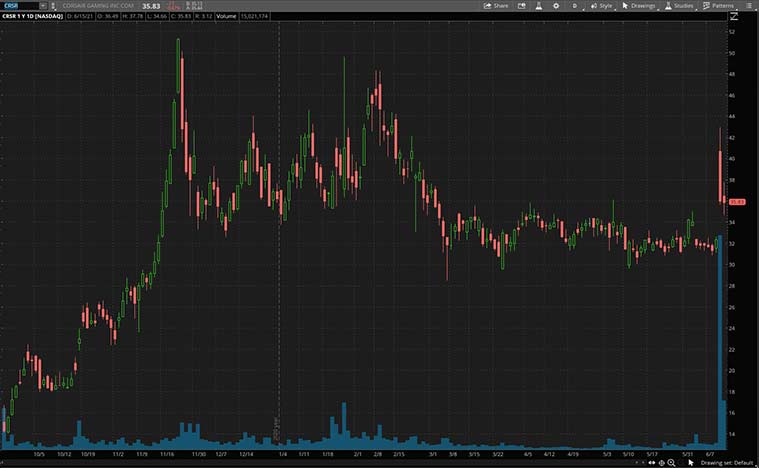 
This story originally appeared on StockMarket

Is Now The Time To Consider Buying These Top eSports Stocks?

Gaming stocks may have been under pressure along with the stock market over the past few months. But one thing’s for sure. That is their fundamentals remain intact, at least in the near term as the coronavirus pandemic acts as a short-term tailwind. If anything, the video game space is the fastest-growing entertainment category worldwide, reaching $177 billion in total revenue in 2020.

Even if you have been living under a rock, chances are you know that video games were already a growth industry even before the health crisis. The coronavirus pandemic just cemented gaming as a top entertainment choice for many consumers. With many top gaming stocks gaining steam along with many other tech stocks, it would prompt some investors to load up these profitable names. After all, many analysts see gaming as a high-growth industry that will only expand with time.

Be it from a short-term trading or long-term investing perspective, the gaming industry is one attractive sector to keep an eye out for. As the awareness of eSports continues to grow, so does the interest in the exciting industry. With all that being said, are these the best gaming stocks to buy in the stock market today?

Corsair Gaming is off to a strong start for the week as Wall Street Bets finds its latest meme stock. With the surge in interest from Reddit comes higher trading of CRSR stock. That’s what seems to be the latest trend in the stock market today. For those unfamiliar, Corsair Gaming is a provider of premium video game equipment targeted at gamers who want to bring their gaming experience to the next level. Having said that, if you’re an eSports enthusiast, you would most probably be familiar with the products Corsair supplies.

With the rise in the popularity of esports, there has been consistent growth in sales for Corsair. From its first-quarter results, overall revenue grew 72% year-over-year to $529 million. Also, the company continues to see improved profitability, as gross margins soared to 30.3% from 25.5% from the prior-year period. Despite its strong sales in its first quarter, the management’s modest guidance of an 18% increase in revenue for the full year signals that a slowdown is imminent. Despite neutral management projections, there’s no question that eSports continues to grow at a rapid pace. And that simply means CRSR stock should reap the benefits as Corsair boasts the number 2 market share position across the industry.

When it comes to shaping the world of interactive entertainment, few companies could play a bigger role than Activision Blizzard. However, for those who are new to the scene, this company is a developer and publisher of interactive entertainment content and services. From its first quarter, revenue came in at $2.07 billion, beating estimates of $1.78 billion. Activision Blizzard reported earnings per share of $0.84, topping analyst’s estimates of $0.70 per share. It’s no secret that Activision Blizzard is an industry leader that is well-positioned to continue delivering gains to its shareholders.

Not only is the company financially strong, glimpses of what lies ahead with the company‘s strategy moving forward have also been revealed. Without a doubt, Call of Duty has been a success for the company, where its player count tripled over the past two years. Now, the company plans to replicate its success with its other games. CEO Bobby Kotick even mentioned on the company’s latest conference call that “Call of Duty is the template we’re applying to our proven franchises.” So, do you consider ATVI stock to be a top gaming stock to buy right now?

Sea is a Singapore-based e-commerce and gaming company. From a first glance, you would have thought that it’s the e-commerce business that powered the company higher. But Sea is on this list because of its profitable gaming segment Garena. The company attributed Garena’s growth to the popularity of Free Fire, a self-developed battle royale game that was launched in 2017. In brief, Garena is a global game developer and publisher with a presence in Southeast Asia, Taiwan, and Latin America. It provides access to mobile and personal computer online games.

In its first-quarter earnings report, Sea’s revenue skyrocketed to $1.8 billion, an increase of 146.7% year-over-year. On top of that, the gross profit was $645.4 million, up by 212.1% year-over-year. Zooming in, the digital entertainment business contributed $781.3 million in revenue. The profitability of Sea’s gaming business can be compared to Amazon’s (NASDAQ: AMZN) cloud business which subsidizes the growth of its lower-margin marketplaces. With the gaming segment continuing to generate returns, is SE stock a potential multi-bagger in the long run?

Skillz is a gaming company that focuses on its online mobile multiplayer video game platform and is integrated into several iOS and Android games. The company went public via the SPAC route with First Eagle Acquisition. But what do you know about this growing player in the gaming market? For the uninitiated, its platform helps developers build multi-million-dollar franchises by enabling social competition in their games. Leveraging its patented technology, Skillz hosts billions of casual eSports tournaments for millions of mobile players worldwide.

Recently, the company announced that it will be acquiring Aarki to form an integrated esports advertising platform. Aarki is a leading marketing platform and the acquisition will broaden Skillz’s footprint across the rapidly expanding mobile gaming industry. This would be the case as Skillz’s competitive platform and Aarki’s advanced advertising capabilities would synergize well. Skillz will acquire 100% of Aarki for approximately $150 million in cash and stock. Will you add SKLZ stock to your watchlist?

Online gaming platform Roblox offers gamers an immersive experience in the virtual world. Even if you have not heard about it through its blockbuster IPO, chances are you have seen some of the kids immersing themselves in the virtual world. The company was founded with a vision of connecting people through immersive 3D environments. Unlike Electronic Arts (NASDAQ: EA) and Take-Two Interactive Software (NASDAQ: TTWO), Roblox users create games and play games created by other users. The company has achieved massive success through its sticky and self-sufficient ecosystem. And more importantly, RBLX stockholders have enjoyed fairly strong returns.

From the company’s first-quarter financials, revenue for the quarter came 140% higher to $387 million. Its bookings also increased by 161% to a whopping $652.3 million. Roblox also reported that its average daily active users (DAU) were 42.1 million, an increase of 79% year-over-year. Besides, user engagement increased to 9.7 billion hours, almost doubling year-over-year. What’s fascinating is that even users who aren’t gamers stick around just to hang out with each other. With all that in mind, would you be buying RBLX stock now?

I’m A PCOS-Focused Dietitian: These Are My Go-To Nutrition Tips

2021 Olympia Saturday Night Recap: It Was a Ramy Repeat