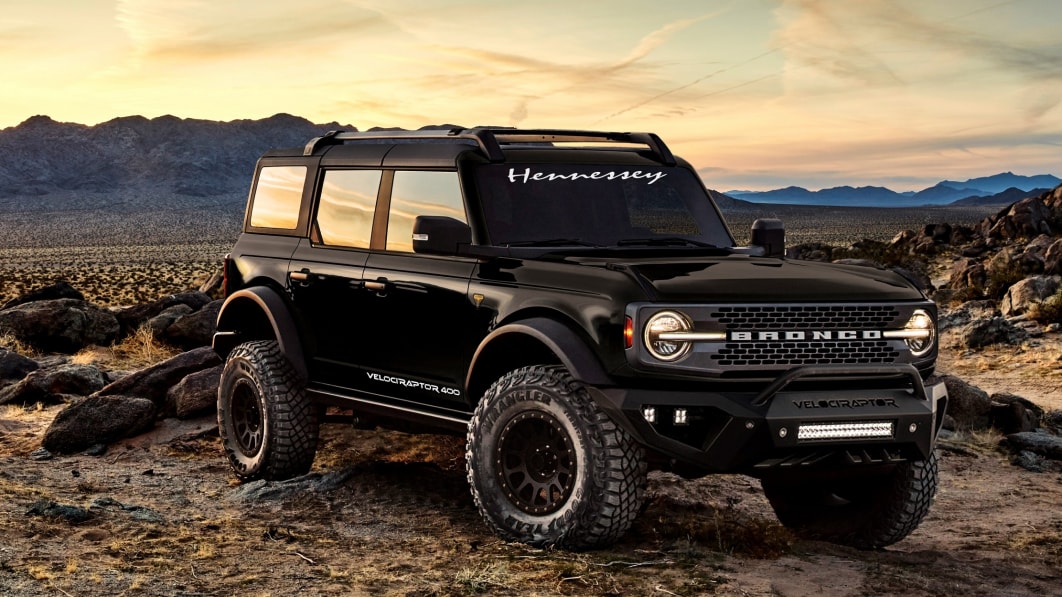 Ford has finally launched production of the 2021 Bronco, and some of its earliest clients are aftermarket tuners that see the SUV as a blank canvas. Texas-based Hennessey started by adding 75 horses to the off-roader’s cavalry.

Hennessey retains the twin-turbocharged, 2.7-liter EcoBoost V6 but installs revised intake and exhaust systems and recalibrates the engine management software. When all is said and done, the six-cylinder develops 405 horsepower at 5,700 rpm and 503 pound-feet of torque at 3,900 rpm, increases of 75 horsepower and 88 pound-feet over the stock Bronco’s output on premium fuel.

Reaching 60 mph from a stop takes a hot hatch-like 4.9 seconds, according to Hennessey.

Hennessey will cap production of the VelociRaptor 400 at 200 units for the 2021 model year. Pricing starts at $80,000 including the cost of a donor Bronco Wildtrak, and each build is covered by a three-year, 36,000-mile warranty. Enthusiasts who want to put their name on a build slot can contact an authorized Ford dealership.

If a 405-horsepower punch isn’t enough, Hennessey also plans to develop the V8-powered Bronco that Ford won’t build. Preliminary specifications sketch the outline of a 750-horsepower off-roading supercar equipped with a 10-speed automatic transmission (a stick won’t be offered), an array of suspension modifications, and visual tweaks. Production will be limited to 24 units for the 2021 model year, and pricing starts at $225,000 before shipping.

Motorists who want a V8 in a Bronco may soon have another option to choose from. Ford and historic partner Shelby strongly suggested they’re working on a hotter version of the SUV that we’ll see in the not-too-distant future.