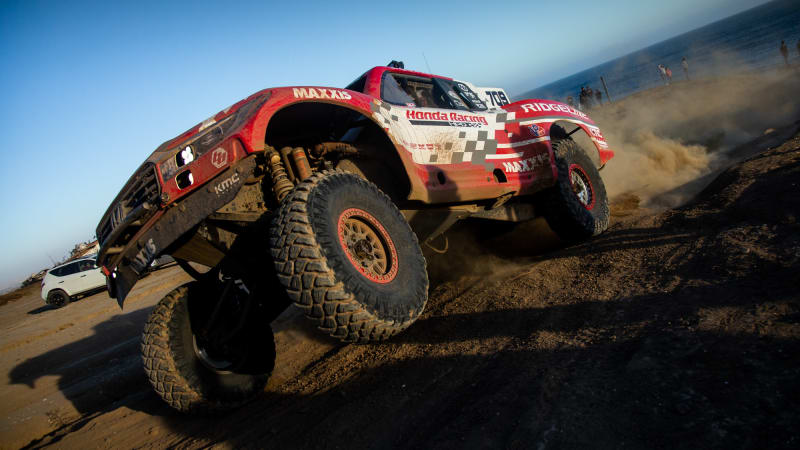 Over the weekend, the Honda Ridgeline captured its fourth consecutive class win at the legendary Baja 500 off-road race. It was actually the fifth such win for the Honda team in the past six years.

As expected, the heavily modified competition rig doesn’t have much in common with the Ridgeline truck that you can buy at your local Honda showroom. The chassis is a custom built tube frame with custom composite body panels draped over it. However, one commonality is the engine, a version of the Honda 3.5-liter V6 that comes in the stock Ridgeline.

The Baja racer runs in Class 7, the category for unlimited V6 trucks, and as such it utilizes the same cylinder block and heads as the production Ridgeline. Here, though, it’s been tuned to 550 horsepower by Honda Performance Development thanks to a turbo, custom ECU, and HPD intake.

Driver Jeff Proctor and co-driver Pat Dailey ran the 466-mile course along with 242 other vehicles, starting and ending in Ensenada along the Baja California peninsula. Though there were only five vehicles running in Class 7, the Honda team beat out Ford and Chevy entries in its class, as well as many others, by finishing 27th overall. Only 132, or slightly more than half of the vehicles entered, finished at all in the 25th running of the legendary race.

“This was a very fast, yet very technical Baja 500, demanding as always,” said Proctor. “It was extremely dusty, with many single-track lines that didn’t really allow for passing. But the entire Honda Off-Road Racing Team was on fire today, thanks once again to everyone for all of their effort and hard work, it all paid off for us once again.”