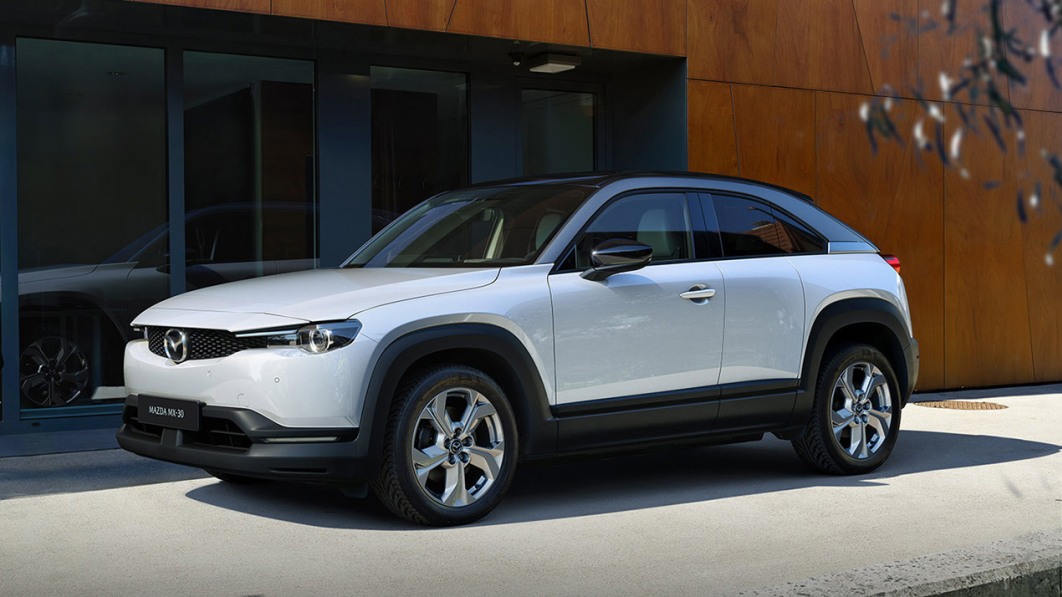 Mazda’s first electric car, the MX-30, made its debut in 2019. It’s a bit of a niche model, but it will be joined by at least 13 electrified vehicles in the coming years. Many will be built on the same basic architecture to cut costs.

Known as the Skyactiv Multi-Solution Scalable Architecture, the platform will underpin five hybrids, five plug-in hybrids, and three EVs due out between 2022 and 2025. Mazda noted it’s excluding mild-hybrid systems from these tallies, but it clarified that some of the regular hybrids will use technology sourced from partner Toyota. As we’ve already reported, one of the Toyota-powered models will be a crossover built in a new plant in Alabama.

With a coupe-like roofline and RX-8-like doors, the MX-30 (pictured) is unlike any other EV on the market. Its relatively small battery pack illustrates Mazda’s unique approach to developing an electric car, and it could shed light on what the three upcoming EVs will look like on paper when they arrive. One of Mazda’s top engineers explained his team settled on a 35.5-kilowatt-hour pack after analyzing factors like how much energy is required to build the pack, how much electricity is needed for a full charge, and the environmental impact of replacing the battery, which Mazda expects could be necessary after the MX-30 has covered about 100,000 miles.

Looking ahead, Mazda plans to launch a second scalable platform called Skyactiv Scalable EV Architecture that will underpin several products “with various vehicle sizes and body types.” It’s too early for the firm to provide additional details because the cars built on it won’t arrive until 2025 at the earliest. Some will launch as late as 2030. By that point, Mazda predicts its full product portfolio will feature some degree of electrification, and that EVs will represent about 25% of its global sales. It will be interesting to watch which side of the graph the MX-5 Miata lands on.

Lightness has been one of the Miata’s greatest attributes since its the original model arrived in 1989, yet all forms of electrification add weight. Some are lighter than others; mild-hybrid technology is far more manageable than a full electric powertrain. Regardless, big challenges are ahead, because an electrified Miata is in the pipeline.

Semi-autonomous technology is on Mazda’s radar, too. Its Co-Pilot suite of driving aids is scheduled to make its market debut in 2022 in one of the company’s bigger cars. Our crystal ball tells us the CX-50, which will spearhead the company’s upmarket ascent, will be one of the first vehicles to offer Co-Pilot. Over-the-air updates and vehicle-to-vehicle communication are coming to future vehicles, too, and engineers are working with their counterparts at Suzuki, Subaru, Daihatsu, and Toyota to create the common language cars will speak in the next few years.

While enthusiasts waiting for a new rotary-powered sports car shouldn’t hold their breath, Mazda stressed it isn’t done developing the internal combustion engine. Far from it. It’s preparing to launch a straight-six engine that will be available in gasoline- and diesel-powered flavors, though only the former will be sold in the United States. It will be found in vehicles built on a rear-wheel-drive architecture, including the CX-50 and the next-generation Mazda6.