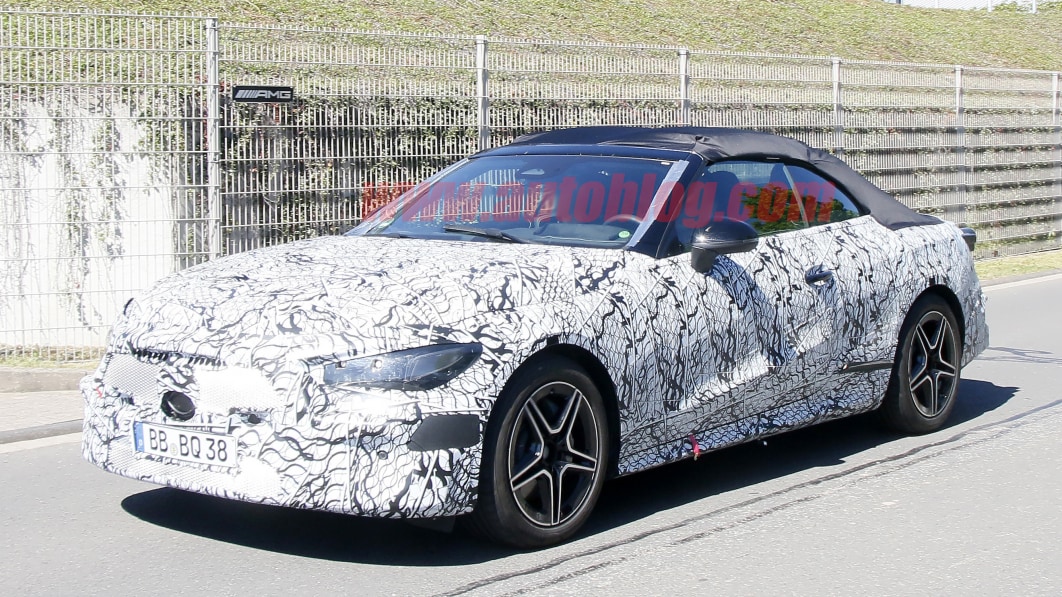 Reports that Mercedes has plans to cull models from its lineup broke a little less than a year ago, and the two main body styles on the endangered list were coupes and convertibles. Both the C-Class Coupe and Cabriolet were suggested as possible cuts, but here we are today looking at spy shots of the next-gen C-Class Cabriolet.

The car is in an early stage of development, as evidenced by the crude lights and elaborate camouflage coverings. We can’t see what kind of top Mercedes is employing yet due to the canvas covering the entire thing, but the chances are good that Mercedes sticks with a soft top like the previous generation. BMW went away from the hardtop convertible with its new drop-top 4 Series. Plus, the new Mercedes-AMG SL is going with a soft top.

Mercedes’ new C-Class styling is half-visible through the camouflage. We can see the one crease extending through the doors on the lower part of its sides. However, the hood is totally covered up, and so are the front and rear fascias. Just imagine all the venting and style from the sedan, but applied to this prototype. The one we’re looking at here appears to be a standard model, not an AMG performance variant.

From the side, it looks like the car’s length will provide for at least a somewhat usable rear seat. That rear window extends fairly far backward, and the car itself is rather long. Mercedes did a good job tenting over the car’s rear to disguise its final shape. The actual decklid will likely be a little longer than what it appears like in these photos, as the canvas covering extends further than a real soft top would.

Seeing that this car exists is still the biggest news of all today. We have no reason to believe that Mercedes has reversed course on its plan to cut models, but now we know that the C-Class Cabriolet isn’t one of them. That still leaves the C-Class Coupe as a question mark, though. Neither Audi nor BMW are in the mood to cancel their compact coupes, and we’d be sad to see the Mercedes competitor go. Now that we know one of the two-door C-Class models is going to exist, that gives us hope that the other could be on its way.