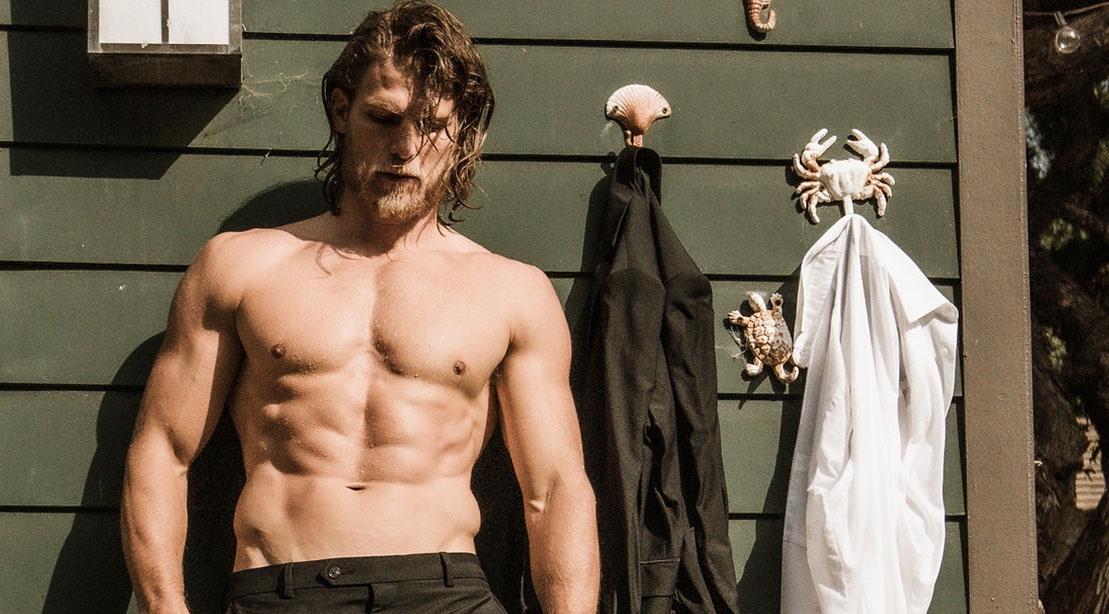 At age 38, Travis Van Winkle hasn’t always been this ripped. The actor struggled with his weight while in his 20s before leaning-up for Hollywood roles that include the character Trent Sutton Demarco, whom he portrayed in Michael Bay’s Transformers in 2007, and in a historic crossover, again in Bay’s Friday the 13th reboot in 2009.

The actor says that as a youngster, his approach to fitness wasn’t scientific enough, leading to water weight. Since then, Winkle’s on-screen credits have included dozens of television and movie appearance, but it’s his recent debut in Season 3 of the Netflix thriller You that’s proved to be his most calculated and committed approach to getting in shape.

In an exclusive sit-down with M&F, the handsome Californian details the monumental achievement of gaining 10 pounds of lean mass, sharing the preparation and method behind the muscle.

Travis Van Winkle fell in love with yoga having being skeptical, at first, about the whole premise. He took to yoga so much that 10 years ago, he invested in a new studio called Urban 728 along with his friend Stacey, and instructor Joe K. “There was this euphoric feeling that came over me,” he says. “This is really something that is beneficial. It’s so helpful for detoxing through sweat, connecting your breath with stretching, and I love the spiritual element of it. So, I started in 2009 and it became a thing where I did it once, and wanted to do it more and more. I was doing yoga five or six times per week.”

Over the years, yoga, coupled with triathlon training (a discipline he has excelled at since childhood) became Van Winkle’s staple workouts for dropping weight in order to look camera ready, but when the actor read the script for his character, Cary Conrad, in You, he decided to transform himself by adding some major muscle. “The idea came from just really getting to know the character,” says Van Winkle. “He’s a leader of men, the king of his cul-de-sac. He takes men on retreats, has a successful supplement company, he’s a hunter, a proven athlete. All of these things are embedded in who Cary is. My feeling was, that in order to really embody this guy, I wanted to put on 10 pounds [of muscle], and walk the walk … And, No. 2, millions of people are going to watch this, and I’m gonna be freakin’ shirtless on screen!”

Putting the plans in place “I met up with Grant Roberts, who’s an amazing trainer and nutritionist,” he says. “I had about two months to put the weight on, and then I sustained it over the next four months (of shooting).” Roberts is a respected coach who has buffed-up celebrities such as Kumail Nanjiani and Eva Longoria. The trainer began by scanning the actor’s physique, in 3-D, to identify areas of focus for his workouts. In terms of nutrition, Roberts also set the number of macros that the actor would need to eat each day. It was a learning curve for the Californian, because he’d never measured his food intake with this method before.

5 days per week meal plan Breakfast: Half a cup of oats. Half cup of blueberries. One cup of sugar free almond milk and a scoop of whey protein powder.

Lunch: Salmon or chicken breast with broccoli and rice or sweet potato.

Post-workout: His five-day-per-week gym sessions would be followed by a whey protein shake, using water, spirulina, a scoop of essential greens powder, a scoop of (HCL) creatine. “I would always put broccoli and spinach in my protein shake,” he says, knowing that they are both high in vitamins, dietary fiber and potassium. Workout sessions were structured to focus on the areas that needed the most work, so for Travis Van Winkle, areas such as the chest, quads, and biceps were trained twice each week.

The actor also supplemented with Omega 3 oils twice per day.

Thanks to his 5:2 approach, the growing star could then enjoy burgers and pizza at the weekend while still hitting his macros goals. “Grant says they aren’t cheat meals, they are your load meals,” shares Van Winkle. “Because I wanted to gain weight, so you load on Saturday and Sunday, and on Monday and Tuesday you work out the areas of your body where you want the biggest gains.” The actor explains that when you work out, you are sending blood to the muscles, so the carbs will be directed to the area that you work in the gym. “It was all strategy,” he says.

Prepping for a successful shoot

Having gained the weight, Winkle had to stay in peak physical shape through some arduously long shoots, including a dramatic Episode 5, in which most of his scenes take place in the woods. “I worked with Grant, diligently, in order to have a plan,” says Van Winkle. “In this particular episode, the prep leading up to it was really intense. You water load, and then you water fast. I would carb load the night before [big scenes], and carb load the morning before. And on shoot day, I would do mini pump sessions with weights before each different setup. I’d prep every meal before I went to work,” he says. “I’d prep 2 omelettes with spinach. I would prep 2 chicken breasts with spinach and asparagus. There’s not a lot of sodium in there. I knew that these meals were pretty much just to reach my macros and wouldn’t take away from my cut.”

Even Winkle’s pre-take pumps were carefully considered. “Before each pump, I would have a rice cake, and a scoop of raisins,” he says. “As we transitioned into the night shoot, I was exhausted, but what I love about this job is that you get presented with a situation that’s challenging, and you rise to the occasion … because you have to.”

Trusting in the Process

Travis Van Winkle found that rather than feeling hungry or irritable during both cutting, and maintaining his added muscle, the actor actually enjoyed having a process that was clearly mapped out. “When you are in this pocket where you are eating very specifically, to achieve a certain goal, your energy levels are through the roof,” he says. “I thrive with structure. I was really proud that I put in the work and the dedication to get there, because I felt like it really helped me go to places (mentally and physically) on set that I wouldn’t have got to. I didn’t want to coast on this project, so I doubled down and took my focus level to some insane degrees. It feels great to be strong.” Having mastered Carey Conrad’s alpha male physique for YOU, the actor says he is now ready for anything that Hollywood has to throw at him.

How To Flourish As A Fierce Fire Sign, According To Astrologists

How To Flourish As A Fierce Fire Sign, According To Astrologists

Over 40 & Low Libido? How To Increase Intimacy, From An OB/GYN

Former NCLH CEO: The Rebirth of the Travel Industry Is Coming